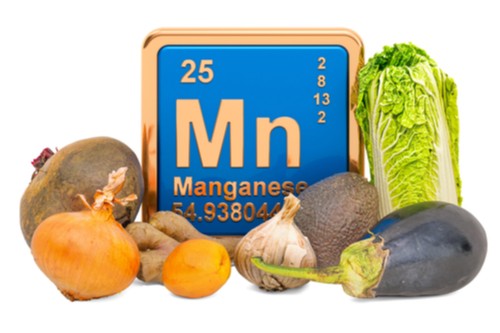 Manganese is a trace mineral that’s essential for the human body, but you only need it in smaller amounts. Manganese plays a major role in different body functions, including reducing inflammation, blood clotting, and bone formation. It also helps improve the metabolism of carbohydrates, glucose, cholesterol, and amino acids.

Although the human body doesn’t produce manganese, it can store it in the brain, kidneys, bones, pancreas, and liver. You can get sufficient manganese every day by eating the typical diet. Supplementation beyond the recommended daily allowance isn’t necessary, and too much manganese can result in toxicity.

Manganese is important for producing antioxidants and several enzymes, which aid in lipid and carbohydrate metabolism and fight off the damage caused by free radicals. Also, manganese is needed for improved brain function and a healthier nervous system.[i] Following are some of the health benefits provided by manganese:

Manganese plays a major role in blood sugar regulation, which further prevents the progression of chronic diseases such as type II diabetes. Also, it normalizes insulin secretion and synthesis for the management of unpredictable blood sugar.[ii]

Manganese helps boost the metabolism and production of enzymes, which control cholesterol levels.[iii] Also, it helps with the proper functioning of the liver.

Strengthening Of The Bones

Manganese helps relieve painful PMS symptoms. Studies have shown a link between low levels of trace minerals like manganese in women with severe PMS symptoms. It’s for this reason why such women are encouraged to take manganese supplements.[vii]

Many people aren’t aware of the epileptic seizures that are caused by low levels of manganese. Researchers find manganese to be useful since it functions as a vasodilator to prevent epileptic episodes.[viii]

Manganese deficiency is common amongst children on total parenteral nutrition (like tube feeding) when such diets lacked enough manganese. You get most of the dietary manganese from both animal and plant sources to meet your daily needs. For that reason, you need to be more worried about getting overexposed to manganese instead of being deficient in manganese.

Severe health problems of the long-term deficiency include:

A 2020 review also showed that manganese is essential for the growth and function of your brain and nerves. Therefore, failure to get enough manganese could cause health problems in both, which can have significant effects on your body.

Taking lots of manganese might lead to toxicity. The allowable Upper Limit for manganese is 11 mg for adults and approximately 9 milligrams every day for adolescents.[ix]

Consuming a lot of manganese could interfere with iron absorption from the diet. This is because iron and manganese share transport and absorption pathways. So, if you take too much manganese supplements, it means your body will only absorb less iron. The same applies if you take a meal with too much iron. Taking more than 11 mg of manganese every day might result in cognitive issues.

The greatest source of manganese poisonousness is from inhaled manganese powder from smelting or welding and manganese consumed from water polluted with dry cell batteries. Also, overexposure cases have been reported in parenteral nutrition, particularly in infants and newborns. Parkinson’s disease-like signs such as muscle rigidity, slow movements, or shaking and tremor might also develop in some cases of manganese overdose.[x]

To avoid any of these side effects, you should consult your doctor before ingesting manganese supplements. It’s important to enquire whether the supplements might interfere with your current medications.

Health supplements are promoted as being high in manganese (about 16 or 20 times the RDA), which raises toxicity issues. If you’re planning to start taking supplements, consult your doctor first. You should never take more than what has been outlined on the packaging label.

The recommended dietary allowances are based on a persons’ nutritional needs. The RDA for manganese is based on sex and age. Breastfeeding and pregnant women need a little more.

Ways To Get Your Manganese

Manganese is considered an important nutrient and is found in whole grains and seeds and small amounts in tea, leafy green vegetables, nuts, beans, and legumes. You can also get your recommended daily allowance for manganese from supplements. However, we recommend that you get your manganese from dietary sources because you also get to enjoy more benefits, which come with food.

Eating a meal that includes different plant-based foods will offer enough manganese. This mineral is vital for health, but you aren’t likely to develop manganese deficiency or see the benefit because of overconsumption, exceeding the RDA.[xi]

As mentioned earlier, dietary manganese can be found in seeds, nuts, legumes (dry beans and lentils), pineapples, and whole grains (like oats and wheat). You can also get manganese from different animal products. Manganese is steady in cooked foods.

Finally, if you ultimately choose to start taking manganese supplements, the National Institutes of Health recommends that people search for the supplement’s labels on the packaging.[xii] The label usually contains important information, such as the amounts of ingredients and data about added ingredients.

It’s recommended that you also look for the product, which has a seal of approval from the 3rd party body that offers quality tests. These agencies include NSF International, ConsumerLab, and U.S. Pharmacopeia. Although an approval seal doesn’t necessarily guarantee effectiveness or safety, it provides some guarantee that the supplement was manufactured properly, doesn’t contain any harmful contaminants, and has all the active ingredients outlined on the product labels.

What is the main health benefit of manganese?

Although it’s only needed in small amounts, manganese plays a significant role in different body functions. It plays an essential role in reducing inflammation, blood clotting, and bone formation. It also helps other body functions, such as the metabolism of carbohydrates, cholesterol, and amino acids.

What foods are rich in manganese?

What role does manganese play in the body?

Manganese is an essential trace mineral, which is present in small amounts. It’s found in the pancreas, kidneys, liver, and bones. Manganese aids the formation of sex hormones, blood clotting factors, bones, and connective tissues.

Is manganese bad or good for you?

Manganese is essential in the connective tissues, in the formation of blood clotting factors and bones, its also involved in blood sugar regulation, calcium absorption, and carbohydrate and fat metabolism.

Can manganese make you crazy?

Overconsumption of manganese can cause manganism, a condition that’s similar to Parkinson’s disease. The early phase may affect mental health leading to psychosis, hallucinations, aggressiveness, apathy, and irritability.

What are the symptoms of manganese deficiency?

How much manganese should you take every day?

The daily-recommended allowance for manganese for men above 19 years is 2.3 milligrams and 1.8 milligrams for women.