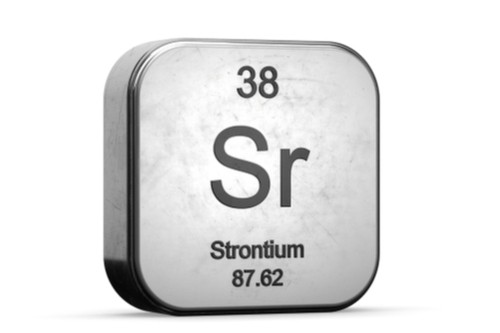 Strontium is a natural mineral that’s similar in behavior and molecular structure to calcium. It’s usually recommended by some health practitioners to treat bone mineral loss (osteoporosis). In the list of the most common elements, strontium ranked number 15. It’s a non-radioactive silvery yellow metal with several uses in medicine.[i]

The radioactive strontium-89 is intravenously administered to relieve pain among people with bone cancer. Some companies add Strontium chloride hexahydrate to toothpaste to reduce pain in teeth (like in products such as Sensodyne). While some people choose to take strontium as a dietary supplement to prevent the loss, however, there is enough evidence supporting its effectiveness and safety when taken orally.

Strontium is a trace element that plays a significant role in healthy bones. Strontium’s benefits are unlike other nutrients on this planet. The mineral works along with calcium to improve bone density and reduce the risks of osteoporosis.[ii] Read on to learn more about the health benefits of this mineral.

Although it’s well-known, calcium is essential for stronger bones. It isn’t as well known that strontium increases the ability of the body to absorb calcium. Strontium does this in different ways. It improves the body’s ability to absorb calcium, including activating the calcium-sensing receptor on the cells. These receptor cells detect calcium presence and increase absorption.

Strontium improves the rate at which osteoblasts are formed. The trace mineral “Turns On “the genes that boost osteoblast cell differentiation and replication. These processes are vital in the formation of osteoblasts and promoting their growth. It also increases the rate of osteoid production.[iii] Osteoid is the bone’s unmineralized portion.

Strontium controls the activity of OPG and RANKL; these are essential molecules that regulate the rates of bone resorption. It’s also known to increase osteoprotegerin that serves as the decoy for the RANKL and slows the rate of bone resorption. This is more important for postmenopausal women. This is because the menopausal transition results in reduced estrogen levels.[iv]

Improved Resistance To The Fracture

Strontium is known to boost the formation of healthy bones that leads to enhanced mechanical resistance to fractures.[v]

Since strontium isn’t an essential mineral, there are no specific levels that it can be considered deficient. In simple terms, there isn’t a reason that any individual needs to start taking strontium supplements, mainly because there are other effective ways to treat bone mass loss.

About 99% of strontium in the body is found in the bones. Although similar in structure to calcium, strontium isn’t an essential mineral, and it’s comparatively found in small amounts. It is often found on the surface of bones in levels 1,000 – 2,000 times less than calcium.

Despite the belief that strontium supplements help prevent osteoporosis because strontium ranelate, a similar medication approved for the same use in Europe, it was found it increases the risk of pulmonary embolism, deep vein thrombosis (DVT), and heart attack and is currently restricted for use in the postmenopausal females with severe osteoporosis. It’s also important to note that strontium ranelate hasn’t been approved in the United States.

Also, some scientists have questioned the health benefits of strontium ranelate because bone growth was attained by replacing the natural calcium in the bones with strontium.

It is not yet known whether strontium supplements are entirely safe. Technically, it’s unlikely that strontium supplements will pose health risks if most of them are removed in stools and urine to prevent accumulation. This varies from one person to another based on weight, age, and the status of the liver or kidney.

Also, stomach upset might sometimes occur if you take the supplements without taking any other meal (particularly with strontium citrate)[vi]. Strontium supplements might be utilized with lots of caution in specific groups, particularly people with chronic or acute kidney disease who cannot effectively excrete strontium. People with bone disease (Paget’s disease) should avoid these supplements because the bones tend to absorb this mineral more aggressively than other people.

Some people still believe that strontium citrate and strontium chloride should be avoided by people at risk of heart disease, considering the experience with strontium ranelate. Moreover, strontium shouldn’t be given to children as it can displace calcium in developing bones, permanent bone damage, and cause rickets. The same applies to nursing or pregnant women who might expose babies to excess strontium levels.

If you finally decide to start taking strontium supplements, opt for brands, which have been thoroughly tested and approved by independent agencies such as ConsumerLab, NSF International, or U.S. Pharmacopeia.

Where To Get Your Strontium?

Strontium is found in sea vegetables and seafood you eat. It can also be in higher amounts in dairy products, leafy vegetables, and the grains we eat. Seafood, grains, and cereals are strontium-rich. The amounts of strontium in fruits and vegetables depend on which soil they have grown in. Coastal areas such as California are well known to have strontium-rich soil. So, vegetables from California will most likely have high strontium levels.

Essentially, plants are a much better source of strontium as compared to animal products. Beans, peas, carrots, lettuce, spinach, root vegetables, and grains contain pretty high amounts. Brazil nuts are a great source of natural strontium. If you want to get your strontium from seafood, you should look for filter-feeding shellfish such as scallops and oysters.

Dairy products such as cheese and milk are a great source of natural strontium. Low-fat products contain more strontium than the full-fat options. If you are looking to get your strontium from your coffee, opt for whole milk instead of cream. The cream has the same amount of strontium as whole milk. In essence, cheddar cheese and skim milk are some of the best sources of strontium.

Strontium supplements are readily available in soft gel, capsules, or tablets. While there are no specific guidelines that direct their suitable use, doses under 680 mg in adults are considered safe for use in the short term.

In Australia and a few countries in Europe, strontium ranelate, a form of strontium, is available as a prescription drug to prevent and treat bone fractures and osteoporosis. However, the food and drugs administration has not approved these supplements for sale in the United States, and it is different from the types of strontium that comes in the supplements, which are available in the United States.

What is the main benefit of strontium?

What food is high in osteoporosis?

Strontium is found in seawater, and as a result, it can be found in sea vegetables and seafood you eat. It’s also abundant in dairy products, leafy vegetables, and grains.

What does the strontium do to the bones?

Strontium has many similarities with calcium. It plays a major role with regard to the growth of bones and slows down the loss of bone mass. This means it might affect the strength of your bones. Foods high in strontium include caffeine, wheat bran, legumes/beans, alcohol, high salt foods, Brazil nuts, almonds, sardines, and canned salmon.

Is strontium bad for you?

Ingesting or breathing low levels of strontium hasn’t been shown to affect health in any way. High strontium levels might damage the bone marrow and lead to anemia and prevent the blood from clotting properly.

Is strontium good for teeth?

Strontium treatment might be highly beneficial in reducing calcium loss from teeth non-carious and carious, which is beneficial.

What can cause higher strontium levels?