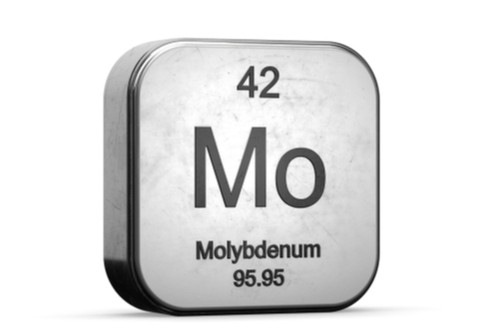 Molybdenum is an essential trace mineral used by the body to break down proteins and other vital substances. You get molybdenum from different kinds of foods that you eat. The richest sources of molybdenum include legumes, lentils, and peas.

Molybdenum is stored in the bones, adrenal glands, kidneys, and liver. The mineral is also found in the skin, spleen, and lungs. You only need small amounts of molybdenum to help normal metabolism; in fact, about 90% of what you eat is eliminated in urine.

Molybdenum functions like a cofactor for three groups of enzymes, which means it’s essential for enzymes to function properly. It’s incorporated in a molecule known as molybdopterin that allows the activity of sulfite oxidase, aldehyde oxidase, and xanthine oxidase. The enzymes metabolize sulfur-containing amino acids, pyrimidines, and purines: the aldehyde oxidase and xanthine oxidase, and other substances involved with metabolizing toxins and drugs.[vii]

In the rare event that you get molybdenum deficiency, the body won’t process the amino acids. This can activate the condition called sulfite sensitivity, where you develop an asthma-like reaction to beverages or foods containing sulfites.[viii] Most of the health benefits associated with molybdenum supplements are largely based on the notion that it will improve the body’s enzymic function, treating or preventing conditions as:

Considering the high excretion rate from the body, it’s rare that supplements might increase concentration to optimal levels that are also considered therapeutic.[ix] Essentially, the body can only store and use so much. Furthermore, such conditions should regularly be associated with molybdenum deficiency, but some are more likely to occur for other reasons.

For instance, asthma and sulfite sensitivity are both activated by some abnormal immune responses. Besides, if you don’t have molybdenum deficiency, taking molybdenum supplements won’t change this effect.

In the same way, although molybdenum aids maintain tooth enamel, there is no enough evidence that supplementation could make bones or teeth stronger.

On the other hand, there are some researchers who highlight that low levels of molybdenum are associated with esophageal cancer. The same applies to other deficiencies of selenium, zinc, vitamin E, vitamin C, vitamin A, and beta-carotene. Despite what some people say, supplementation with any minerals or vitamins hasn’t been shown to reduce cancer risks.

Since people typically consume more molybdenum than the body requires, molybdenum deficiency is uncommon. While molybdenum supplements are readily available, doctors rarely recommend the supplements because health problems caused by their deficiency are infrequent.

The estimated daily consumption of molybdenum in the United States is 109 mcg per day and 76 mcg per day for men and women, respectively. This exceeds 45 mcg per day, which is the recommended dietary allowance (RDA).[ii] However, it’s important to note that information about molybdenum consumption in other countries varies; in most cases, it’s always above the stipulated requirements.

Also, there have been a few reported molybdenum deficiency instances, which are associated with severe health conditions and other problems. In some cases, a hospital patient received artificial nutrition via a tube and wasn’t given any molybdenum. The lack of molybdenum in the diet causes severe symptoms, including breathing and heart rate, disorientation, vomiting, and ultimately coma.[iii]

Long-term molybdenum deficiency has previously been observed in a few populations. It is associated with the increased risks of esophageal cancer. In China, esophageal cancer is over 100 times more prevalent than in the United States. It’s highly likely that the soil in these areas contains low molybdenum levels, leading to long-term dietary consumption.[iv]

Moreover, in some areas with higher risks of esophageal cancer, such as South Africa and northern Africa, the levels of molybdenum in nail and hair samples were very low.[v] Keep in mind that most of these cases are in individual populations, and deficiency isn’t an issue for many people.

Molybdenum supplements are usually considered safe if the dose doesn’t exceed 1mg per day. However, there isn’t enough research available assessing the long-term effects of molybdenum supplementation. Molybdenum does not seem to cause adverse side effects because they are quickly removed from the body. That said, diarrhea is a possible side effect at very high doses.

For such reasons, molybdenum supplements should be avoided unless the deficiency is diagnosed with more blood tests. This also applies to individuals with gout because supplements will only increase the risks of attacks.

Taking too much molybdenum causes a build-up of uric acid because of the actions of the enzyme xanthine oxidase. Gouts occur when increased uric acid levels in the blood cause tiny crystals to form within the joints, resulting in swelling and pain.[xii]

The National Academies Of Sciences, Engineering, And Medicine determine the DRI (Dietary Reference Intake) for minerals and vitamins.[xiv] These are the amounts you should eat from all sources based on sex, age, and other factors such as pregnancy. The recommended daily allowance for molybdenum are as follows:

Where To Get Your Molybdenum

You can get your recommended daily intake of molybdenum from the food you eat as well as supplements. Nevertheless, it’s best to get your molybdenum from food sources because you also get other nutrients and enjoy other benefits. However, with molybdenum supplements, you only get the mineral and nothing else.

Almost with no exception, you don’t need molybdenum supplements. A study showed that Americans eat about 0.12 milligrams to 0.24 milligrams per day from dietary sources, well exceeding the daily-recommended allowance.

Incase you’re still concerned about molybdenum deficiency, consult a doctor to get a proper diagnosis for the amount you need. In most cases, you can get enough molybdenum from food sources such as:

If you take supplements, they are often available in tablet form, with doses that range from 250 micrograms to 500 micrograms. Also, there are some multivitamins that contain molybdenum. While molybdenum poisoning isn’t likely, the allowable Upper Limit from all food sources is 2 milligrams every day. At this point, the body should be able to process and excrete extra molybdenum with no accumulation risks.

If you are considering taking the molybdenum supplement, you should only choose the brands, which have been thoroughly tested and approved by independent certifying authorities such ConsumerLab, NSF International, or U.S. Pharmacopeia. Always consult a doctor before you start indulging in alternative therapy without fully understanding the limitations, benefits, and risks of treatment.

What is the main health benefit of molybdenum?

Molybdenum is an essential element found in high concentrations in organ meats, grains, and legumes. It triggers enzymes and helps them break down hazardous sulfites, and prevents the build-up of toxins.

What food are high in molybdenum?

Is molybdenum bad for your health?

What are the symptoms of molybdenum deficiency?

What happens if you take lots of molybdenum?

Exposure to too much molybdenum can be dangerous, causing diarrhea, anemia, and pain. The doctor might test the levels of molybdenum in your blood if they suspect exposure to very high amounts.