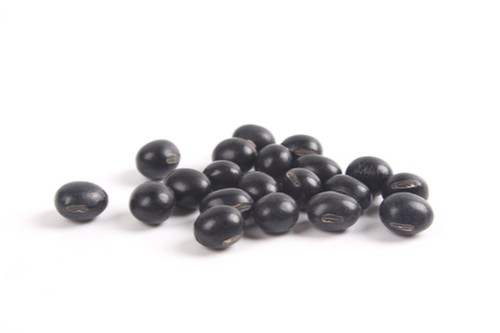 Black soybeans (Phaseolus vulgaris) are a black type of the common soybean. They are a legume indigenous to China and have, over the years, been used as a staple in many North American diets. Black soybeans have a mildly sweet flavor and a highly satisfying texture. The black soybeans are also remarkably healthy, offering many essential nutrients with minimal sugar and fat.

Black soybeans are packed with antioxidants, minerals, vitamins, fiber, and protein, so eating them brings numerous health benefits. For instance, soybeans can reduce depression and hot flashes. It could also improve kidney function and skin health.[i]

Studies have shown the possible benefits of soybeans in reducing the risks of hormone-dependent cancers like ovarian, colon, and prostate cancers[iii]. Other research has found that soybeans reduce risks of breast cancer, particularly if eaten early in life. It’s also safe for survivors of breast cancer.[iv]

Furthermore, fiber intake from vegetables such as black soybeans is associated with reduced risks of colorectal cancer. Also, black beans contain high amounts of folate that plays an essential role in the synthesis of DNA, hence preventing the formation of cancerous cells.[v]

Black soybeans are high in phytonutrients, including antioxidants, much higher than other types of soybeans. The main difference between black and white soybeans is the hull color, so any nutritional difference can only be found in the bean’s black outer shell.

In the same way as raspberries and blueberries, the dark outer shell of the black beans contains antioxidants that prevent the oxidation of molecules. This helps reduce the risks of chronic illnesses like diabetes, cancer, and obesity.[vi]

Diets that are high in plant-based proteins like black soybeans are usually associated with reducing risks of heart disease. A study conducted in 2017 focused on legumes as the primary source of protein found similar evidence of reduced risks of cardiovascular disease. Another study focused on isoflavone substance in soybeans and showed it’s associated with reduced coronary heart disease risk.[vii]

The United States department of agriculture has provided the nutrition information below for ½ cup of canned black soybeans.[viii]

½ cup of black soybeans contains 8g of carbs, which is about 7g of fiber with minimal sugar. While black soybeans’ exact glycemic index hasn’t yet been calculated, it’s probably the same as other legumes. High in fiber, black soybeans are digested slowly, which reduces the rate at which blood sugar levels rise.

Black soybeans have a small amount of fat, but its healthy unsaturated fat. Also, these beans contain both omega-3 and omega-6 fatty acids.[ix]

Black soybeans are a great source of plant-based protein. ½ cup serving contains 11g of protein. In essence, soybeans are a complete protein, which means they have all the amino acids the body needs.

While some individuals might have concerns about eating isoflavones or estrogen-like compounds present in soybeans, studies show they aren’t associated with an increased risk of hormone-related cancer or breast cancer.[x] If you’re still concerned about this, speak to a health physician to get advice on whether soybeans are a great add-on to your diet.

Like other legumes, black soybeans contain ‘antinutrient’ substances that interfere with the absorption of nutrients if overconsumed. Soaking the beans and then cooking them before eating reduces the effect of these substances. However, the antinutritional factor doesn’t cause any symptoms if the food containing antinutrients is consumed in moderation.

In the same way as other soybeans, black soybeans contain FODMAPs, which can cause digestive issues in some people unless they are eaten before they mature or made into tofu. For this reason, black soybeans aren’t ideal for people on a low-FODMAP diet.

Soy is a known allergen. So, if you’re allergic to soy, then you should avoid black soybeans and other varieties of soybeans, as well as other soy products. Common symptoms of black soybean allergy include anaphylaxis, hives, wheezing, diarrhea, and vomiting.[xi]

Furthermore, people with non-celiac gluten sensitivity and celiac disease have been found to react to soy, mainly because they are grown in rotation with wheat and might be cross-contaminated with gluten.

Native to China, the history of black soybeans tracks over 7,000 years ago. They were introduced to Japan in the 8th century and later spread to other countries in Asia, including Vietnam, Korea, Malaysia, Thailand, and India. The Americans who brought the black beans from China introduced black soybeans in North America back in the 18th century.

Although American farmers only started to grow these beans in the 19th century, they only received public attention in the early 20th century. It was only after the 1940’S that American farmers started focusing on soybean. Internal revolution and the Second World War disrupted China, the largest supplier of soybeans at the time.

After the US entered World War II, the significant rise in demand for plastics, lubricants, and oils resulted in more demand for soybeans. And then nutrition pioneers like John Harvey Kellogg and George Washington Carver discovered and started promoting the many benefits of soybeans. Since then, people have started appreciating the nutritional benefits of black soybeans, and their interest has been increasing over the years.

Basically, the increased popularity of black soybeans over the past few years can be attributed to the recent scientific research supporting many ways through which these beans promote health. Today, the US is the largest commercial grower of soybeans, followed by India, China, Argentina, and Brazil.

How To Prepare Black Soybeans

Black soybeans can be used as an alternative for high-carb beans like pinto, navy, and black beans. Also, you can substitute them in diets that use other types of beans like bean salads, chili, bean soup, refried beans, and baked beans. Because of black soybeans’ silken texture and delicate skin, they should be cooked differently than other common beans. Soak the beans overnight before cooking to avoid mushiness.

Whether you’re using a stovetop or pressure cooker, you’ll have to skim off the pot top several times when cooking the black soybeans. Once boiled, reduce the heat to simmer and remove the whitish-gray foam. Add vegetable oil and onion or garlic as you continue cooking to regulate foaming while cooking.

When are Black Soybeans Best?

Black soybeans season is traditionally during the spring. Soybeans are harvested between September and October. However, you can always find them in your local grocery store throughout the year. You can either choose dried or canned beans.

How to Buy Black Soybeans?

What are Black Soybeans?

Are Black Soybeans Good for You?

Yes, black soybeans and green beans are keto-friendly bean alternatives. Each of them contains only 2grams of carbohydrates per half a cup serving.

Do Black Soybeans Have Estrogen?

Soy contains a high level of isoflavones, a plant-based type of estrogen that has many similarities with human estrogen but with weaker effects.