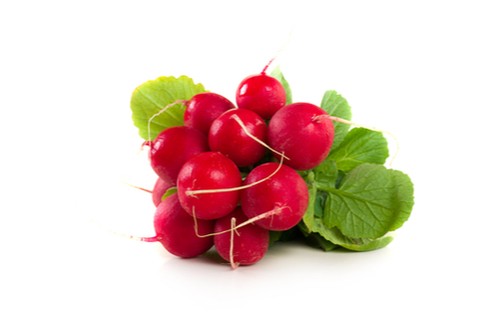 Radishes are root vegetables with crunchy flesh and variable skin color. Radish varies in shape from round and short to narrow and long, and the skin can be purple, pink, yellow, white, black, or red. Ancient Romans and Greeks used radish for medicinal and food purposes.

Radish (Raphanus sativus) is a spicy and peppery root vegetable that’s less starchy than other root vegetables like parsnips and potatoes. It belongs to the cruciferous veggie family, related to broccoli, cabbage, and turnips. Radish was among the first European vegetables introduced to the United States. It can be cooked like a potato to enjoy the milder flavor or eaten raw in a salad. Radish is low in calories but is a great source of vitamin C.

Radishes have many health benefits thanks to their antioxidant, vitamin C, and fiber content. For instance, vitamin C is essential in different physiological processes, including immune system regulation; wound healing, and protein metabolism.[i]

Studies have shown that radishes might be beneficial for individuals with diabetes mainly because it slows down sugar absorption and minimizes starch induced post-meal GL (glycemic load).[ii]

In the same way as the cruciferous veggies, radishes contain a substance called glucosinolate. This compound has anticancer and antioxidant properties and could reduce cholesterol levels in the liver, eventually preventing the formation of gallstones.[iii]

Radishes might seem like they don’t have much in common with the broccoli, but both of them are cruciferous vegetables. Studies have shown a relationship between diets high in these highly nutritious vegetables and reduced risks of cancer.[iv]

In the same way as antioxidants, dietary fiber contains numerous health benefits, which researchers have so far identified. These include the prevention and management of digestive diseases, diabetes, high cholesterol, and heart disease. Also, researchers have been looking at fibers’ ability to prevent infections and improve memory and mood.[v]

Radishes contain antioxidant substances, which provides some of their anti-diabetic power. Also, anthocyanin gives radish a bright range of unique colors. Studies show that eating more radishes is associated with a reduced risk of heart disease. Also, antioxidants are beneficial since they help repair the oxidative stress that’s caused by free radicals. This stress could contribute to diabetes, obesity, inflammation, and other conditions.[vi]

The United States Department of Agriculture provides the nutrition information below for one cup cut, raw radish.[vii]

Radishes don’t have starch, a digestible form of carbohydrate that breaks down to simple sugars. The carbs present in radishes are half fiber and half simple sugars (fructose and glucose). A foods glycemic index (GI) is a measure of how fast and how much a food raises blood sugar. Like many non-starchy veggies, there isn’t any scientific study of the GI of radishes.[viii]

Radishes have a minimal amount of fat.

Like many veggies, radishes aren’t high in protein, even though it contains less than 1 gram in one cup of raw radishes.

Radishes are a great source of vitamin C, with only 17 mg per cup serving. This is about 23% of the recommended daily intake for women and 19% for men. Since the body cannot create its vitamin C, eating it on a diet or through supplements is important. Also, radishes contain small amounts of vitamin B6 and folate and the minerals calcium, manganese, and potassium.[ix]

Some individuals might find the flavor of radish too spicy. However, cooking them instead of eating them raw can make them more edible. If you aren’t used to eating lots of fiber, you should gradually increase your fiber intake to prevent digestive symptoms.

Allergies to radish are very rare, but medical studies have reported a few. Signs of allergic reactions include swelling around the moth, difficulties breathing, itching, and hive. Incase you suspect any allergy to radishes, consult a health provider about management and diagnosis.[x]

Radish comes in a variety of types, sizes, and colors. Korean radish and daikon radish are popular in Asia. The red and white European rashes are often used in American cuisines. All types of radishes have the same nutritional value, but preparation is vital. For instance, pickled radishes contain higher amounts of sodium than the free versions. The red radish is related to horseradish.

The daikon radish grows to over one foot in length. Daikon radishes are indigenous to East Asia, where they are a staple, but they are also popular in Middle Eastern cuisines and south Asia. They are sweet but slightly thorny to eat raw.

Malaga radish has a very attractive deep purple skin, resembling that of beetroot. The good ones are vivid white inside and crisp. They are mild, earthy, and sweet.

The white hailstone radish looks like golf balls with lush and long green leaves that betray the relatively diminutive size. These radishes are incredibly versatile, mild, and crunchy. If you are looking to grow radishes, consider white hailstone radish. They are great as fermented, cooked, or eaten as a raw snack.

Radishes green leaves are edible. However, because of the coarse texture, they shouldn’t be used in salads unless they are very small and young. They can also be cooked.

Radishes have petite blooms comprising four petals that form the shape of the Greek cross attached to a think green stem and 4 yellow stamens.

Radishes were first discovered in China about 1000 years ago and slowly spread to the west. They gradually became an important food in ancient Rome, Greece, and Egypt. In Egypt, radishes were grown in large numbers during the time of the pharaoh. Records show Egyptians ate radish even before the pyramids were constructed.

However, they didn’t spread to the west until much later. History books show that radishes were found in Germany back in the 13th century but reached England until 1548. Radishes were later introduced to North America, but it was not until 1629 when they started being cultivated in Massachusetts.

There are five common types of radish grown in the US. Red Globe radish is the most well-known type. Also, the radish is small and has white and red coloring. It’s commonly eaten sliced or whole on salads. The other types of radishes cultivated in the United States are black varieties, white icicle, California mammoth white, and the daikon.

Many people are used to having raw slices of radishes on a salad or having raw French radishes with butter toppings. Also, you can try frying, steaming, or roasting them. However, some of the peppery flavor is lost if they are cooked, and you can season your radish with a variety of spices or herbs.

Radish slices on a green salad is the most common way of using them, but you could also make radishes the delicacy of your salad. Dice cucumber and radish and toss them with a topping that includes pepper, salt, olive oil, and lemon juice. Allow the salad to marinate in your fridge for about 3 hours before serving. Also, you can try out cooked radishes:

Separate radishes and greens for storage. You can store your radishes in a fridge for a few weeks and the greens for few days. To store in a freezer, slice and blanch first. Thawed radishes look best in cooked dishes than salads.

When are radishes best?

Although the radish season is traditional during the spring, you can still find them in your local grocery store all year round. Radishes also grow in home gardens.

How to buy radishes?

What are the benefits of eating radishes?

Radish is rich in minerals like potassium and calcium, and antioxidants. Together, the nutrients help reduce risks of cardiovascular disease and control blood pressure. Also, radish is an excellent source of nitrate essential for improved blood flow.

What are the side effects of radishes?

Radishes are safe for consumption. However, overconsumption might result in dehydration because of their natural diuretic properties.

Are radishes good for weight loss?

Yes, especially when consumed raw as it has lower calories. One cup of radish contains 2g of fiber, which is essential for weight loss. Also, it helps increase your fiber intake and lower your cholesterol.

Can radishes cause gas?

Can you eat radish at night?

Yes, you can eat radish at any time you want. Radish is higher in fiber and low in calories, which makes it perfect for digestion.